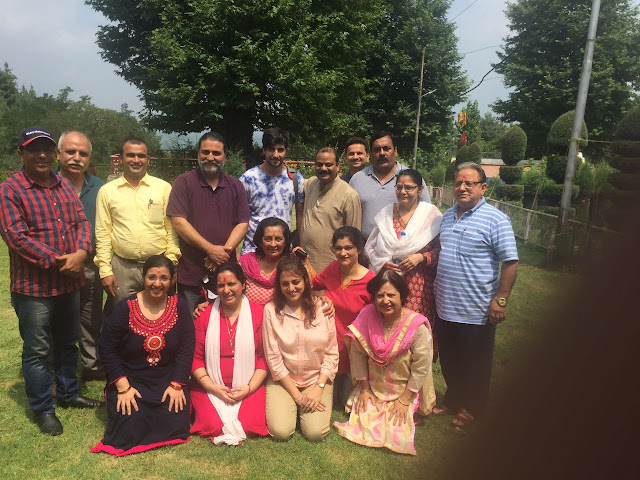 Kashmir Trip -Shhudhhikaran Yatra By Sahaja Yogis   This was one of the first few trips undertaken to Kashmir Valley with the objective of reviving the purity of Kashmir, the Valley that was founded by Rishi Kashyap. The tour that started on 22nd of July lasted upto 31st July. There were as many as 19 Sahaja Yogis from Noida and Jammu. On the day of arrival a large Havana was performed that was also attended by local Sahaja Yogis from Kashmir who had been waiting for an opportunity like this. Their local centre having been closed for many years due to various reasons. Jammu collective had brought the Coconuts by road as also the Altar and Havana items for this occasion. These coconuts were vibrated and then placed in the ground at the temple as also immersed in different water bodies like, Dal Lake, Jhelum River, Sindhu River etc. The team also visited Mata Kheer Bhawani with the intention to explore the possibility of future camping at that location. The Temple of Mata
Post a Comment
Read more

Let’s listen to Mr. Nagendra N. Tikku’s spiritual journey! Hailing from a very staunch religious background of Kashmiri Pandits, Mr. Tikku also followed the Lord Shiva bhakti as the rest of his family members. His forefathers even had the ability to give-up their bodies willingly when they decided to leave for their heavenly abode! So one can understand that already he belonged to quite a spiritually evolved family! Post exodus of Kashmiri pandits in the year 1989-90, life became pretty difficult for their entire family, but slowly and gradually they began to settle down in life. One fine day Mr. Tikku’s father handed him a leaflet of Sahaja Yoga and advised him to reach out to them. Initially he showed no or very little interest but after couple of weeks he went and attended their meditation sessions. Nothing happened for 8 months – no feeling of vibration – but a general feel-good factor made him to continue attending the Sahaja Collectivity! The much awaited day arrived in his life
Post a Comment
Read more 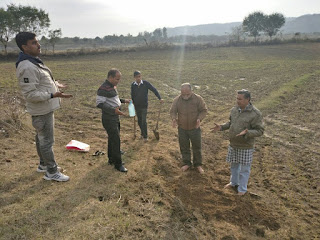 Sahaja Yoga@ JK Tour-Jammu Region Local Sahaja Yogis from Jammu had organised this. It primarily involved visiting Schools and Villages that are within an earshot distance from Pakistani Border Outposts. In fact in many of these locations one could see their Observation Posts/Towers overlooking the roads, schools and houses. Mr. Sharma a Sahaja Yogi from Jammu was the Principal at one of these Govt. schools and you can clearly see from the way he has put up messages from Shri Mata Ji on the school walls and across the school's premises. In this particular school children regularly practice Sahaja Yoga Meditation and the teachers have seen marked improvement in the overall performance of the students. The images in this set show coconuts being planted in the fields next to the India-Pakistan border. The fields belong to a local whose family is practicing Sahaja Yoga meditation. When we were approaching the house of this Sahaja Yogi we felt tremendous flow of vibrations as if we were
Post a Comment
Read more
More posts